Seventh day of national mobilization of the indigenous movement 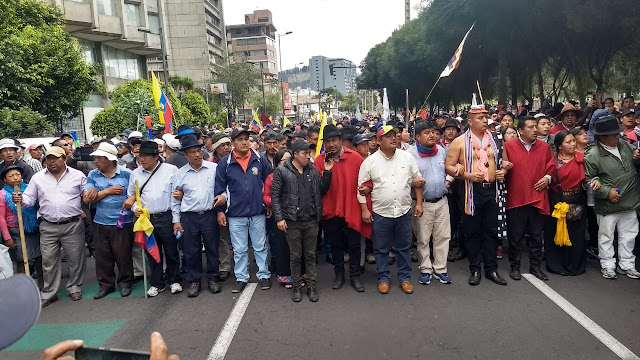 Quito, Ecuador
Day Seven of the National Mobilization of the
Indigenous Movement

October 9, 2019 – In the morning of today, Wednesday, October 9, the indigenous leaders, social and citizen organizations met in the capital of Ecuador, Quito, in the context of the National Mobilization and issued a decree in affrimation of the House of Ecuadorian Culture and El Arbolito Park as indigenous community territories.

Jaime Vargas, president of the Confederation of Indigenous Nationalities of Ecuador (CONAIE), demanded the release of hundreds of people detained in the protests and held the Ministers responsible: Minister of Government, María Paula Romo and Minister of Defense, Oswaldo Jarrín, for the brutal violence of suppression by the Army and National Police; In addition, he stressed that without their dismissal there will be no dialogue.

Leónidas Iza, president of the Cotopaxi Indigenous and Peasant Movement (MICC), insisted on the need to take other alternatives to face the crisis, for which he blamed the previous governments, from Rafael Correa who was the one who resumed the relationship with the IMF. On the racist statements of former Mayor Nebot, he said: «We will stay on strike, taking care of the water and our territories, but we tell him that he will never be president.» He clarified that this mobilization is not only a call from the organizational leadership but a result of the economic crisis that has hit the poorest sectors of this country.

The leaders of the Indigenous Movement and their bases reconciled in declaring «persona non grata» to Jaime Nebot and right-wing actors such as Cintya Viteri, Guillermo Lasso and the Bucaram, after the xenophobic statements made in Guayaquil. Also, they argue that protest actions and road closures are to be replicated throughout the country. The national mobilizations will not stop until the repeal of the economic package imposed by this government is ended. Nayra Chalán, vice president of ECUARUNARI called on the Ecuadorian people to stay in the streets.

Indigenous Confederations March in Quito, Ecuador against Neoliberal Colonialism being imposed via the International Monetary Fund – World Bank – US Government Trade Agreements in collusion with the government of Ecuador under president Lenín Moreno